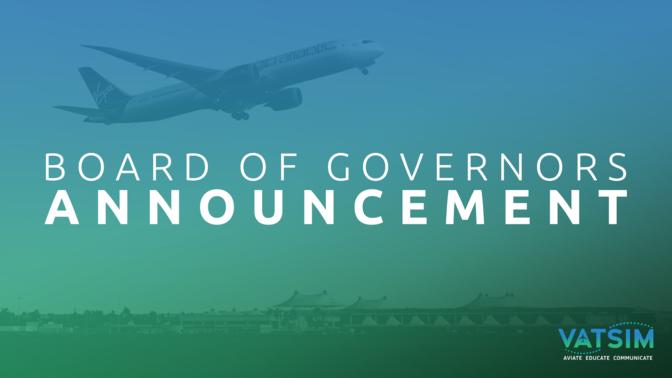 VATSIM is happy to announce that Tim Barber has been selected to serve as Vice President – Operations following the retirement of Mark Richards. In his new role, Tim will play a crucial role by ensuring all departments are working together to bring positive changes to VATSIM.

Tim hails from Canada and joined VATSIM in 2001. He has held several staff positions on VATSIM, most recently as Vice President – Supervisors, a position he has held since 2016. In addition to his time in various VATSIM staff positions, he also helped start one of VATSIM’s first Authorized Training Organizations to provide VATSIM pilot ratings.

Sadly, VATSIM also announces that Ethan Hawes, Vice President – Pilot Training has decided to retire from his position on the Board of Governors, one he has held for the past two and a half years. Under his leadership, VATSIM has come a long way in providing resources for pilot training, and further advancing our key goal of educating members.

Some of Ethan’s key accomplishments were:

The Board of Governors thanks Ethan for his service to the network and wishes him well in his future endeavours.

This movement means that there are now two opportunities for our members to join VATSIM’s Board of Governors at an exciting time of change for the network. As we have shared the plans to bring faster position updates to you with the Velocity project, continue to explore ways to increase pilot quality, and continue to work with other partners to bring even more immersion to your flight simulation experience.

Members interested in joining the Board of Governors as either Vice President - Supervisors, or Vice President – Pilot Training should stay tuned for an announcement on how to apply.

As always, thank you for your continued membership and participation in VATSIM!