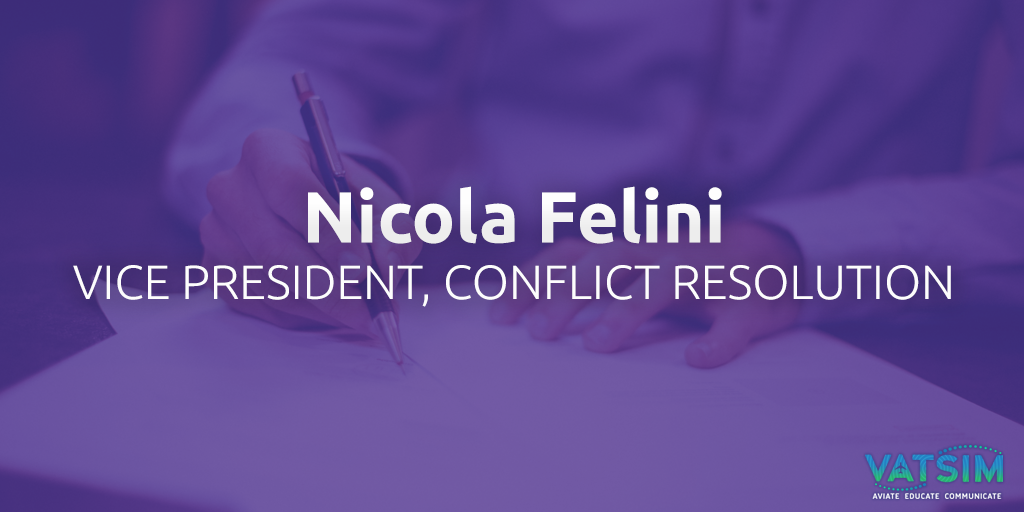 We’re excited to announce that VATSIM North America Region Director, Nicola Felini, has been appointed to the VATSIM Board of Governors as the Vice President, Conflict Resolution.

VATSIM strives to maintain consistency and fairness throughout the conflict resolution process, and as such, Nicola will be responsible for reviewing, modernizing, and maintaining all aspects of the Conflict Resolution division. Nicola was appointed to the position of North America Region Director in 2013, and has also served as the Chairman of the Executive Committee while holding his Region Director role.

Additionally, Nicola will also maintain the duties of North American Region Director until October 1 when we transition to our new structure and the Vice President - Americas is installed.

Outside of VATSIM, Nicola works in the legal system and has a strong background working in conflict resolution, legal proceedings, and managing teams of people. He began his career on VATSIM in the New York ARTCC; he later served there as a mentor, instructor, Deputy Air Traffic Manager, and eventually took on the role as Air Traffic Manager. Along with his other responsibilities, Nicola has also been a long-time Network Supervisor, ensuring that pilots and controllers alike maintain the highest standard while connected to VATSIM.

Please join us in congratulating Nicola on his appointment to this role and to the VATSIM Board of Governors!